Competitors in the 2020 Africa ECO Race have now crossed the border into Senegal on their journey to Dakar.

Whilst it was an easier stage with only a short 187km special stage, the African continent still threw up some serious challenges for the riders.

“The 280km liaison after today’s special stage from Mauritania to Senegal was extremely hard, we were in a sandstorm with shocking wind and horrendous tracks”, reports Coca-Cola Energy/Nomadas Adventure rider Andrew Houlihan.

“We have had dunes, sand, dunes and more sand and dunes for the last 3 days, more than you can possibly imagine, it has been extremely tough going with long stages.”

Over the last 3 days Andrew says he has backed off the pace a bit and been more cautious in the tough conditions just to make sure he makes the finish line in Dakar.

Apart from the terrain and the sandstorms, some bad cramping in his right hand has also made it difficult for him to hold on to the bike.

“I’ve dropped to 21st position overall I think but the whole goal of doing this was to get to the finish line in Dakar.”

Many riders will not make it to Dakar – of the 74 riders who started the event, just 61 are still officially competing. Many of those have dropped a lot of time after being stranded in sand dunes, lost in the desert or dealing with mechanical issues and injuries.

Stage 8 decimated the field and one of those who were stuck in the desert overnight was Nomadas Adventure rider Ashish Raorane.

Ashish had made a navigation error about 30 km in to the special which cost him time and fuel, he was out of water at the 175km point and eventually stuck in the sand and out of fuel before the CP3 refuelling stop. Ashish spent the night huddled by the bike in a rescue blanket and it was over 30 hours before he was safely into the bivouac.

But to even get to the finish line in an event like this, regardless of time or final position, is a major achievement and a challenge that most people could never contemplate taking on.

And such is the tenacity of these riders – Ashish will line up again today for the final stage into Dakar!

Despite the difficulties many of the riders have faced, and the serious crashes that have occurred, Andrew says the atmosphere in the bivouac is amazing.

In terms of outright placings, Italy’s Alessandro Botturi (Yamaha WR450F) goes into the final stage with a 3 minute 59 second lead over Norwegian rider Pal Anders Ullevalseter (KTM). That gap will be difficult to close in the short special stage, so barring major error or mechanical failure the Italian rider seems set to secure his second win.

Paolo Lucci (Husqvarna) is 40m:32s behind Botturi and in a safe position to secure 3rd overall.

Stage 12, the final stage, is a 300km day with a 229km liaison to Niokhob, a fishing village on the edge of the Atlantic Ocean. Riders will line up on the beach for the start of the last special stage – a tradition that goes right back to the original Paris-Dakar rally. The final special is only short, just 22 km, and is followed by a 48km transfer stage to the podium on the banks of Lac Rose in Dakar. 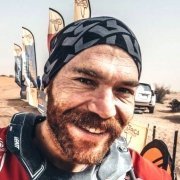 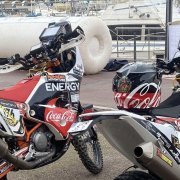