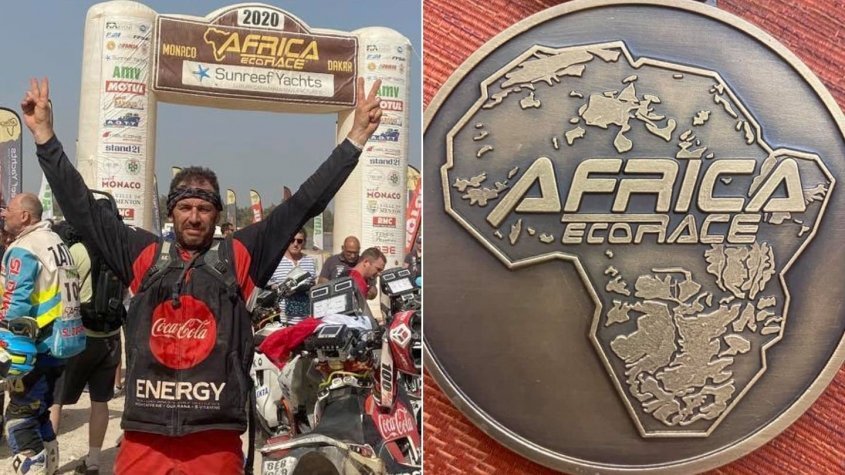 The final stage from St Louis to Dakar was a short one, just 229km of liaison and a rapid 22km special followed by the final trip into Dakar itself.

The riders travelled the liaison stage to Niokhob, a fishing village on the edge of the Atlantic Ocean, knowing that the beginning of the special stage was – well – very special and steeped in history.

Riders lined up on the beach for a traditional group start, creating scenes reminiscent of the early days of the original Paris-Dakar rally.

After racing down the beach beside the ocean, the riders turned inland and circled Lac Rose on their way to the famous podium beside the lake.

The lake has spectacular pink waters caused by algae, and is also known for its high salt content – up to 40% in places.

As the traditional finishing place of the “Race to Dakar”, both the original Paris-Dakar and what we now know as the Africa ECO Race, the stunning scenery has always been a sign to weary competitors that the finish line is close and their dreams of riding to Dakar are about to be realised.

For the 2020 competitors it was the end of 12 very demanding but rewarding days of racing through Morocco, Western Sahara, Mauritania and finally Senegal.

Andrew entered this race with no expectations other than to finish safely, he has achieved that.

Despite losing so much time on stage 2 with fuel pump issues, and then having to deal with torturous conditions in the later stages, he has managed to finish every single stage, remain relatively uninjured and then finish just outside the top 20.

Andrew had not ridden the Coca-Cola Energy KTM 450 Factory Rallye bike before this event, and it took a few days to get used to the bike.

And in the last 3 days of the race Andrew says his right hand started to cramp badly and he could hardly hang onto the bike.

His strong finish in this event also shows that he has what it takes to compete successfully at an international level and fulfil his ultimate goal of racing in the Dakar Rally next year, to be held in Saudi Arabia in January 2021.

The Dakar Rally is certainly the most well known of all the desert rally raids, and is arguably the toughest event on the annual motorsport calendar.

But the Africa ECO Race captures the spirit of the original Paris-Dakar, and competing here has been an excellent preparation for Andrew’s crack at the Dakar next year.

“I had a couple of bad days and a few really good days.”

“Very little sleep for 12 days and just enough food to keep going each day. We saw the best and the worst on Northern Africa and it was an emotional and physical roller coaster.”

“Every day at some stage I would ask myself, why am I doing this.”

“There were some serious accidents, riders stuck in the dunes for 24 hours, bikes and cars breaking down, crazy African desert dwellers to contend with and many new friendships made.”

Andrew’s Coca-Cola Energy/Nomadas Adventure teammate, Pablo Guillen, had a good rally and was one of the few riders who gained positions on the final day.

Pablo picked up one place to finish 17th outright and second in the +450cc class.

The larger engine size of Pablo’s bike dictated that he ran in a different class to Andrew but still competed the same for outright honours.

“I’m happy to finish in 21st position overall despite a couple of really bad days.”

“It’s time to get home to Katie and the kids, add some more titanium pins and screws to my body, recover and get ready for the next race!!!!!” 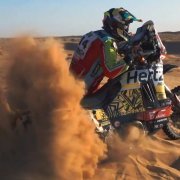